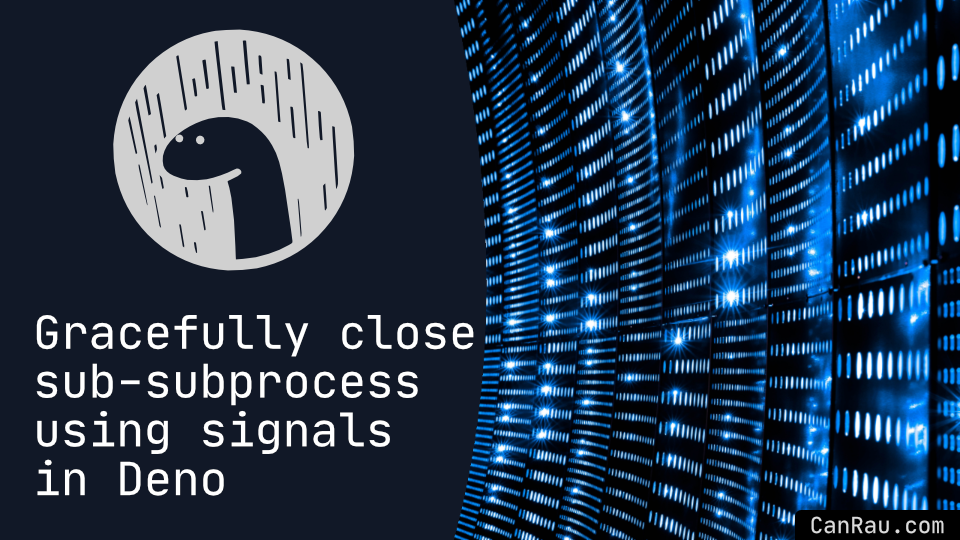 I've got a custom and very simple CLI to help me execute various tasks, mostly, or for now, in development, as there is no package.json in Deno and I didn't want to use Make or something, but use this oportunity to familiarize myself more with Deno's syntax and features.

One command of this CLI executes Deno run for me with all the required flags one of which is --watch to restart the server when I hit save, as I don't have any hot-reload (yet).

Everything works/worked as expected until I started to add a little pomodoro like feature so I could, or actually have to, provide a time duration like 25m, before the actual command, to automatically terminate the running task and tell me in the terminal that time is up and I should keep the promise I made to my partner that I'll be available in 25m 😅

How I got there

So before this, I would, whenever I was ready, focus the console, hit Ctrl + C to quit the session and everything was fine.

Though stopping the thing from the script itself was a little more involved than earlier expected. Okay enough theorizing lets add some code examples, shall we? So the interesting part (for now) is the following

cmd is the command to be run which'll be picked earlier based on what I enter in the command line.
p is a reference to the running process which provides a handy way of awaiting the process asynchronously, so it runs infinitely until canceled and also a close() method to programmatically end the process.

So before my time management helper I would just

which is the nifty helper to keep the process running and called it a day. 🥳
Introducing the pomodoro "counter" I changed that line to

Okay so I use Promise.any to await more than one Promise by giving it an array of promises.
The first is the same as before, only that I had to tell Typescript that it should accept it and to change its type I had to first tell TS it's unknown so I could then type it as Promise<void> which Promise.any would accept.

The second "thing" is ternary condition to check if the command to run is allowed to terminate after a timeout, as I also have tasks to deploy this website which should run until finished. So every command has a pomodoro property set to true, false or not set at all. If it's set and the provided time duration isn't equal to x, which is my prosiblity to bypass the timeout, if I please, then it'll add the timeout Promise to the array, otherwise it just adds null which is valid but won't do anything 😎

timeout is a simple promisified setTimeout I've found on levelup.gitconnected.com. Yes it's simple, but sometimes it's just easier not to spend any time coming up with something I know I can find ready made in a matter of seconds.

The pomodoroUp function I provide to timeout will then be called after timeInMs, which I calculate earlier based on the provided string in the terminal like 13m or 2h.

As you can see pomodoroUp just calls shutDown with a reason, as I use it in different scenarios with differing reasons.

As mentioned earlier, Deno.run returns a couple of properties one of which is .close() so I figured "perfect!", let's call it and listo!
Well, it stops the subprocess and Deno.exit() stops the CLI process, but trying to run ./cli x dev again would error telling me the port is already in use 😨

Yes you read that right, sub-subprocess. The CLI itself is a process, which I can terminate when needed using Deno.exit(). Deno.run starts a subprocess, which is easily stopped using p.close(). But the server I'm starting from within this subprocess, is yet another process, which Deno.run is not aware of, how could it 🤷🏻‍♂️

Be aware, that the signal API in Deno is still --unstable

I was actually already using a terminal signal within my CLI, that's where the sigInt.dispose(); comes from, I'm listening earlier to the SIGINT signal like so

I'm not exactly sure when or why I started using it, as hitting Ctrl + C which sends a SIGINT signal to the running process was already working, so normally you wouldn't need to listen to SIGINT in your CLI to be able to close the process via Ctrl + C, Deno does that for you.

Though, be aware that when you listen to SIGINT like in the last code snippet, you're actually "overriding", it. So you could prevent people from stopping your CLI or do other things, in my case it didn't help at all 🥲

How to stop the Oak server sub-subprocess?

Researching a little more I stumbled upon a hint to the Oak docs on how to close the server.

Now I only needed a way of telling the server to abort from within the CLI.
I could rewrite the whole logic and actually import the server from the CLI and call startServer(), though I'd loose the easy --watch helper.
I could also add a, maybe authenticated, route which I could call using fetch() from the CLI 🤡

More signals to the rescue

Luckily, before diving into all those complexities, I realized my server could also listen to signals 🤯😍

Knowing now that overriding SIGINT can bring problems I figured I should probably use another signal. Deno's types lets me autocomplete all the possible signals Deno.signal() accepts, the only other I recognized and associated with ending something was SIGKILL 😬 haha

Update: Since Deno 1.16 you have to use Deno.addSignalListener

Which shockingly throw the following kinda cryptic error in my face

Now I have to take one of the more complex routes or .. wait, let me look if there's another signal I could use without messing with SIGINT, and sure enough I found SIGQUIT which sounds perfectly fitting for what I want. For all I ever wanted was quitting my server and not killing it 😭😄

Note: the | void type was added to let me put it straight into .then

Now that I don't need the SIGINT anymore I can get rid of the void, which I just noticed thanks to you, writing this article 🥰

I realize now that the CLI API might not be the best cli 7m dev as every change in time messes with command completion from history, might be able to improve this by providing actual auto completion, using omelette, but I might as well change the API first 🤔

In an upcoming article I'm going to share in more detail how I've build my CLI, so stay tuned if your interested. 😉 Also in general going to share more about Deno, which is in many parts "just" Typescript, and in my opinion a much better Node! And also about Go(lang), as that's the language I use for the pageviews counter you can find at the very end of all pages here on this website and in the future also about non programming topics that interest me 🌴🍍🐒